Headquartered in London, fashion retailer AllSaints first contacted Leach about the possibility of introducing ‘ leaning’ non-illuminated graphics within their retail stores. Having successfully delivered high-quality graphic solutions to the retail industry for over 5 decades, Leach were well placed to offer advice and expertise on the best possible solutions for the fashion brand and how they could transform their in-store environment.

To meet their brief, AllSaints compared the option of a wooden vs a fabric graphic solution with the latter coming out on top. The fabric graphic system was more cost-effective and with an interchangeable solution that means in-store staff can update the graphics with minimal fuss and installation costs. 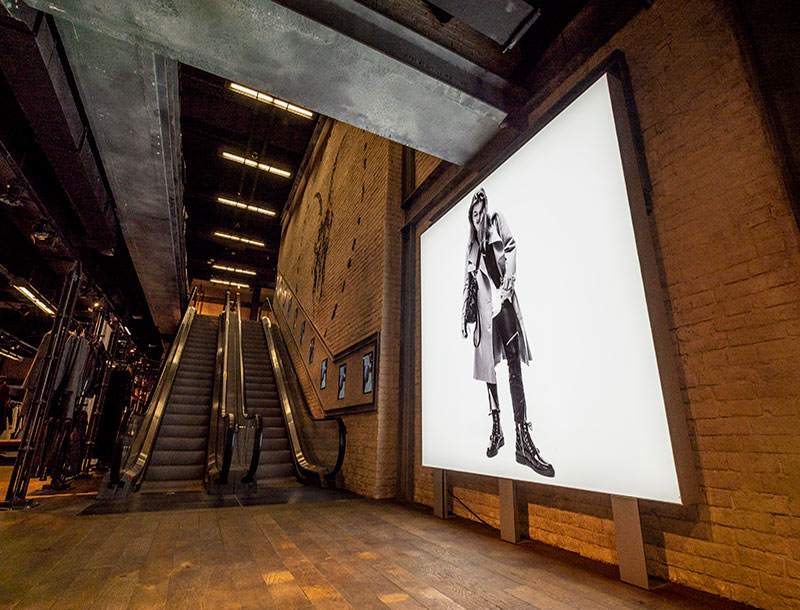 To create the desired ‘leaning’ effect, Leach’s in-house innovation team developed a bespoke bracket for a prototype of the fabric graphic lightbox. This was then showcased to the AllSaints senior management team, to demonstrate the benefits of the lightbox and the quality of the industry leading Pearl fabric, first-hand.

Impressed with the solution, an initial order of over 60 non-illuminated ultra-slim lightboxes was placed with Leach, to be manufactured and installed at selected stores throughout its UK, Europe and worldwide estate, including Germany, Spain, France and the US. In addition to the lightboxes, AllSaints procured a series of direct-to- media prints for their UK stores, including vinyl, foamex, dibond and Perspex – which was testament to Leach’s print capabilities across multiple substrates.

“ From our initial conversation with Leach it was clear that they wanted to work with us as a brand and deliver the right solution for our stores. The non-illuminated lightboxes created impact within stores and gave us confidence that the solution would help to elevate our brand.”

Following the success of the initial lightbox rollout, Leach was asked to provide a graphic solution for AllSaints upcoming Harrods window campaign, which included the entire window space. Having conducted a comprehensive site survey, Leach worked with AllSaints to agree the best and most impactful solution to maximise brand exposure.

“The Harrods window campaign is an important part of our promotional calendar, therefore we wanted to ensure that we captured customer attention. Having supplied over 60 non-illuminated lightboxes to our stores we had no hesitation in working with Leach for this campaign and the visual results were fantastic. In addition, the speed and customer service levels were excellent throughout, with the entire project from manufacture through to installation taking less than 48 hours.”

Impressed by the illumination capabilities of Leach’s industry leading lightboxes, AllSaints then asked Leach to provide its single-sided illuminated lightbox system within two trial sites in the UK.

Peter continues “After just 30 days from the initial install our store managers were already commenting on the positive effects of the new illuminated lightboxes. Overall the results were fantastic and store statistics demonstrated a significant increase in both footfall and sales, following the lightbox installation.”

The results led to an additional rollout across 20 AllSaints stores in the UK and US – however this time with double-sided illumination to increase the wow-factor within store, in addition to the projection through its windows.

Finally, when AllSaints announced a new fragrance was to hit the market and their stores at the end of 2018, it made perfect sense for Leach to provide new HD quality graphics to each store – which their in-store staff could easily replace and install within minutes!

This also meant that graphics could be updated simultaneously by stores, ready for the global launch.

Following the success of the project to date, AllSaints is now planning a second phase of its global rollout, to maximise brand exposure, sales and footfall throughout its over 200-strong store estate.