When the season’s first ICF Canoe Slalom World Cup came to London’s iconic Lee Valley White Water Centre in the summer of 2019, the events team sought an experienced venue dressing partner who could provide a vibrant backdrop to this exciting competition.

For economies of scale and to strengthen brand recognition, it was important that the graphics were reusable so that they could subsequently be installed for the 2020 ECA Canoe Slalom European Championships, next May. Flexibility was required however, as each event has a different international federation and only one logo can ever be present.

Promotion of key partners – including the event’s principal partner Jaffa – was also paramount. The appointed venue dressing partner would therefore have to achieve maximum exposure for these brands across the site, as seen by on-site spectators and the public watching the televised event in their homes. Individual sponsors’ brand guidelines had to be upheld, whilst ensuring a congruent look and feel, in-keeping with the image of the event itself. 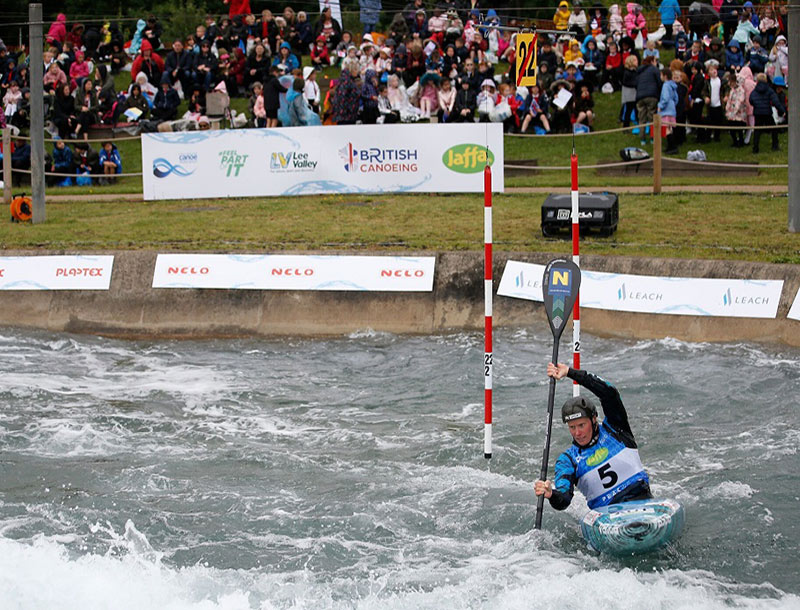 Leach was appointed as the official venue dressing partner for this much-talked-about competition. The brief saw us tasked with creating a range of bespoke materials for the main entrance and buildings, wayfinding around the venue, course-side branding, podium backdrop and the ‘kiss and cry’ area on the finish line.

This meant that the initial scope of works would see Leach manufacture and install 1200sqm of material around the 2012 Olympic legacy venue. However, when the events team announced the addition of an extreme slalom contest – whereby four athletes ascend a 4m high ramp before dropping into the water for a 300m race to the finish – a total of 400 perimeter graphics were included on the wish-list, to help set an even more impactful scene for this rapidly-emerging sport.

Commenting on why Leach was chosen for this sporting project at the time of the announcement, Gareth May, Business Development Manager at British Canoeing said: “Leach has a world class reputation, expertise and passion demonstrated in the museum and retail sectors, and I am confident that their innovative display solutions will showcase and elevate our international events to a whole new level.”

An initial site survey was conducted in November 2018 so that the Leach team could familiarise themselves with the venue, including key locations for the signage. Further proactive suggestions were made for the VIP area, such as an illuminated, interactive kiosk so visitors could learn more about the site/event.

Despite the long lead time on the run up to the event itself, the production of the graphics actually had to be turned around in a tight 2-week period. Nevertheless, all were installed in readiness for the three-day event, despite unexpected challenges surrounding access to the course’s block toppers and the added complexity of rain which made the vinyl difficult to affix to the ramp’s surface. Drawing upon the experience of Leach’s graphics team, solutions were found for all install ‘hurdles’.

Gareth concluded: “In terms of the branding of the venue, it was unrivalled in terms of impact. Partners were pleased with their exposure, the ICF backdrop fulfilled all guidelines and the ramp vinyl provided a real stand-out feature. The look and feel of the whole event was unified too, which is important when you’re striving for brand recognition.

“The illuminated podium was without a doubt the showpiece. Whilst the competition and ceremonies were not held in the dark, the added vibrancy of the lighting provided crystal clear branding across all media outlets. We’ll consider this for use under the ramp in future too, and across the wider site if we hold evening events.”

All graphics were carefully removed from the site for reuse, immediately after the competition, so that the venue could be open to the public as normal, the next day.

Sit back and enjoy this 2-minute video to see how the venue looked when fully dressed and get a taster of what it was like to take part in this exciting competition. To discuss how Leach could help you with your upcoming event project – whether for the world of art, history, sport or entertainment – please contact us on 01484 551200 or enquiries@weareleach.com